Sometimes referred to as the roof of the world, the plateau of Tibet is the highest region on earth. Communities of people live at an average of 16,000 feet. The world’s highest mountain peak, Mount Everest, or Mount Chomolungma (Spirit Mother), towers 29,029 feet above the border of Tibet and Nepal.

In the 1950s, the United States Central Intelligence Agency introduced paramilitary teams into Tibet to train and lead Tibetan commandos against the Chinese Army attempting to claim Tibet as Chinese. The CIA trained the first resistance fighters.

His Holiness the Dalai Lama, the fourteenth spiritual leader of Tibetan Buddhists, fled from Tibet to India in 1959 after a failed uprising against Chinese rule and the Chinese invasion that defined it. Thousands of Tibetans fled their country directly after him, and settled first in Nepal and India. Now there are communities of Tibetans around the world.

One enclave is in Northern California where Tibetan Americans constantly strive to retain their culture and pass it on to future generations. Young people are tutored in the Tibetan language, dance and music, among other traditions, to keep alive a home none of them can ever return to. It doesn’t look as though Tibet will ever be an independent country again.

According to Friends of Tibet, more than a million Tibetans have died as a direct result of the Chinese invasions and occupation. The Friends declaration says that the whole of Tibet was turned into “a vast network of prisons and labor camps,” and contend that China has even massacred prisoners to keep the prison population “within limits.” China continues to claim it has liberated the people of Tibet and that Tibet was never an independent country.

The Tibetan Association of Northern California (TANC) has dreamed of a community center since the first 1,000 refugees were allowed into the United States. (There are only about 9,000 people in the whole of the United States who are of Tibetan ancestry.) “Preservation and promotion of Tibetan culture was the goal,” the association’s website says. “From the founding fathers and mothers to the younger leadership through the decades, we have struggled to realize our dream.”

TANC purchased a facility in Richmond, CA. “We are overjoyed…” they said, but the building needs to be brought up to code, an expense with a $600,000 price tag. Fundraising is ongoing. Last month TANC sponsored, along with the Western Regional Advocacy Project, a fundraising event in Berkeley that included food, dancing, music, talks and singing for the general public. Two examples of the program have been included in this account.

“Our center…is a special place,” the TANC website says. “It belongs to each and every Tibetan. It is your home and our home. We want to turn it into a roaring place of activities of all things Tibetan. It is a sacred place where conscious efforts are being made to nurture caring, sharing, compassion and sanctity of life itself.”

Contact tanc.org if you are interested in boosting this heartfelt Tibetan-American community. We are fortunate to have such earnest American citizens who, at the same time, do not want their children’s children to be ignorant of the thousands of years of profound culture in their background.

Tibet Styles  A lovely shop in the Upper Haight in San Francisco.

Ugyen Dolma is an interviewee from Finding Home. In the book, she discusses her escape from Tibet as a child, her childhood in Nepal and India (where she worked closely with the Dalai Lama) and her uprooting to the United States. She is a citizen of the U.S., has raised three children here and is still paying off their college educations. A proud Mama.

I encourage you to stop by her shop Tibet Styles at 1707 Haight St. in San Franciso,CA

She has a lovely selection of jewelry, Tibetan crafts and gifts. 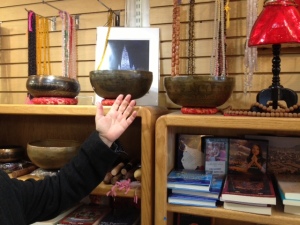 Get a singing bowl and Dolma will teach you how to make it sing.  She will also give you a special Tibetan blessing!