A teacher in the San Francisco Bay Area recently told her students about the town of Locke. Kids told their mothers and four Moms decided they wanted to visit Locke with their offspring. They received a pre-arranged tour of Locke that included viewing the old Chinese garden area and museums displays of where and how Chinese workers lived in the early 1900s. The group of four mothers, four youngsters and one teen also visited a local wood shop, owned and operated by Russell Ooms and Deborah Mendel. They saw the process involved in making cutting boards and were allowed to contribute to their construction.

I’m inspired to write my next book about Locke and it’s rich history so we will see what happens with that.  Below are some photos from the family’s visit to historical Locke,Ca. 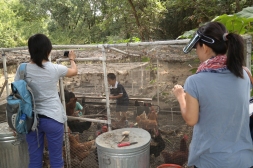 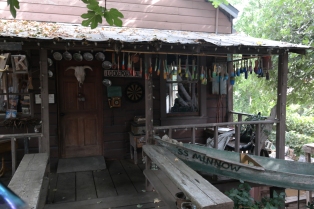 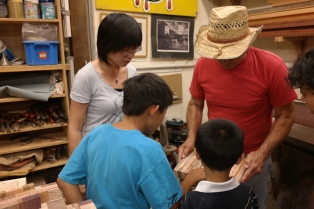 I met Doug Gale and his wife Dorothy when I spoke to a Veterans for Peace group in Pueblo, CO, in 2011. After I interviewed him for my book, Finding Home: How Americans Prevail, I was in frequent contact with him and his family. His beloved Dorothy preceded him in death a couple of years ago. I want you to read about him, and perhaps an excerpt from the book too because he was one of the most kind, courageous and indefatigable people I have ever met. I am privileged to have known him these last few years.

The last time I

saw Doug Gale he wore a T-shirt that said, “Feeding children is our number one goal,” and sported a “Wage Peace” button. Doug did not just speak about and promote peace.  Doug Gale lived it.

He told me several years ago about how in World War II he was miraculously singled out to live when many of his fellow Navy sailors died from an attack on their PT boat as they patrolled the Japanese shoreline. Most naturally, those deaths started him thinking about the senselessness of war.

These thoughts were refined further on the ship that carried him home as he met and talked with other young men about their feelings of loss and regret. These experiences solidified his desire to work for peace the rest of his life and to engage in activities that he felt zealously about in terms of preserving the human race. As a schoolteacher and Boy Scout leader, he took the opportunity to pass on to countless young people his values of caring for others and caring about the world as a whole.

His car and front yard were plastered with bumper sticker messages representing the many and varied causes he and his beloved wife Dorothy thought worthy of support. One of the things that worried him most was the use of nuclear power and power plants with their potential to harm the earth and its people. He voiced hope that the disaster in Fukushima, Japan, would “wake people up.” He believed in the absolute abolition of nuclear weapons.

In 1987, he walked the United States Great Peace March for Nuclear Disarmament that went from Irvine, CA, to Washington, D.C. The marchers visited homes, churches and workplaces along the way. “Atheists, agnostics, Jews, Muslims, Christians—every conceivable race and color—joined the march,” Doug said.

Locally he opposed several plants in the Pueblo area that gave off toxic waste, and nearby munitions dump storing napalm gas, mustard gas and deteriorating nuclear weapons. He talked about mercury contamination that was carried from the electricity plant on the wind. The electricity was not even for local use, Doug said. “All we get is mercury contamination that continues to poison all God’s creations.”

Doug and Dorothy belonged to the United Church of Christ. He said felt good about being part of “a church that welcomes everybody.” After more than 60 years of marriage, Dorothy Gale was declining from Alzheimer’s. Doug, showing his devotion and love for her and his truly Christian spirit, took care of Dorothy in their home. The day I last visited, he fixed lunch from food their grown children had made and delivered to the fridge, and poured glasses of milk the couple made trips to get from a local dairy. I led Dorothy outside while he prepared our meal and we lunched under the cedar tree where they were married in 1949.

Public radio from Manitou Springs was always on in their house. They listened to music on the station and kept up with issues of the day. Doug read daily to Dorothy from magazines geared toward current events. When Doug and I talked during my visit, Dorothy did not speak but she smiled. Her eyes were still lively and she seemed interested in all we discussed.

Doug was an active member of the Howard Zinn Veterans for Peace Chapter 129 named for the author of A People’s History of the United States, one of Doug’s favorite books. He said he was lucky to have been able to spend time with other soldiers on his trip home from the war. “They bring soldiers right home today,” he said. “It’s a shame. Our Veterans for Peace…tries to stay in contact with homeless vets in this area. Many are suffering from PTSD and drug addiction. Our chapter works on all these issues.”

Doug has gone from us now, gone to join Dorothy and his parents. The world’s loss is heaven’s gain. How much we will all miss this dear, loving and lovely man.

Below is from my interview with him on pages 31 and 32 in Finding Home: How Americans Prevail.

In 1945, one month after Hiroshima, I was with the command squadron at the head of all the PT boats. My boat had been chosen because it was surrounded by armored plate and was deemed more defensible. They picked our PT and said: “You’re going back with a silver star or a medal or you’re not going back at all.”

Our job was to patrol the beaches of the Japanese shoreline. The Japanese had landing craft back in the jungles. We’d go after these barges and shoot at them with .50 caliber machine guns and .40 millimeter cannon too. Our boat was special, so special. We worked with a destroyer escort. They would be 3-4 miles out. We would tell them: “This is where you shoot.” They would pick it up on their radar and shoot.

One time we reported barges and the skipper told the escort: “Here they are. Go after them.” But the destroyer took us for the barges and fired on us. I had fortunately gone up on deck for air and was sitting on a life raft. We lost half our crew. I was cushioned from the explosion and thrown up in the air.

I had a life jacket on. Most of force of the explosion took place in the boat underneath me. There were 20 men. Basically I was the only one who wasn’t injured. I had just gone up to get fresh air. I had a break. It was stuffy in the armored compartment down below.

Ten of my fellow soldiers died in the explosion. That experience has influenced me to work for peace for the rest of my life. Wars just breed hate. There’s nothing good about wars…it’s up to us — our patriotic and civic duty — to speak up for peace.