It’s the first evening of summer, the end of a long, fairly hot day, but the community garden is a welcoming spot. Families, couples and single folks are strolling in for the third in a series of cooking classes at the tables in back of Oak Park Sol Community Garden on Broadway.

Tyler Wescott, a certified Food Literacy Center “genius,” is dividing up what can only described as beautiful fresh produce among the three tables. On the back, his T-shirt says: “Ask me anything.” So I do. Tonight the recipes adults and children will be learning to make are white bean hummus—with squash, cucumbers and purple carrots cut up to dip into it—and SunButter yogurt parfait with seasonal berries on top. SunButter is a brand made from sunflower oil, cane syrup and salt, to satisfy the “unsaturated rather than saturated fat argument,” Tyler says. A major thrust of the organization is to encourage children to eat more fruits and vegetables. And to prove to them that those things can taste outstanding. Tyler will be the instructor this evening for this all-volunteer endeavor. His second in command is Tara Martinez who is not yet through the academy but is savvy enough to lend a hand with teaching the creation of parfaits. Tara is working at Whole Foods in Davis but about to transition to a job in Sutter General’s café.

Formerly she interacted with an Obama-supported program that introduced a fruit-of-the-day to schoolchildren. At recess, she would hand out, and teach kids how to eat, everything from oranges to papayas. “The kids didn’t know what half the stuff was,” Tara says. “It made me sad.” She discovered that the Food Literacy Center, which just happened to be next door to the restaurant where she was a cook, was hosting a volunteer orientation. She signed up. “I love everything to do with cooking,” she says. She soon added her name to the volunteer list, which is about a hundred strong now. “I’ve gotten to know a lot of good people who intensions are all the same.”

Pat (no last name given) has lived in the neighborhood 33 years and is sitting on a bench waiting for the cooking to begin. She’s glad that children are being given a chance to become familiar with vegetables. “They wash, cut, stir, mix vegetables they normally wouldn’t try,” she says. The last session she attended they shredded beets, carrots and onions and topped the slaw with vinaigrette they fashioned themselves. “They would never have tried any of that before,” she says. She likes to see the teens participating too. “It’s fun to watch them enjoy the results of their cooking. Particularly the veggie wraps they had us make one time.” She has picked up tips too. Last session she learned to cut a green onion and deposit the part in water that you are not using in your dish. “It keeps growing and pretty soon you have your own chives.” 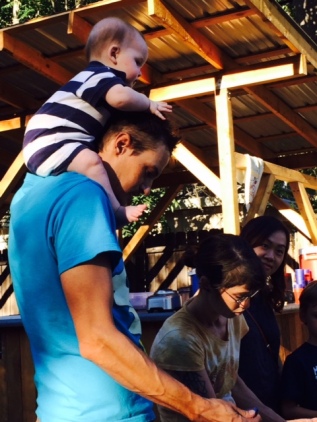 Baby Gage Jones supervises from his Dad’s head while his family makes hummus from fresh produce. 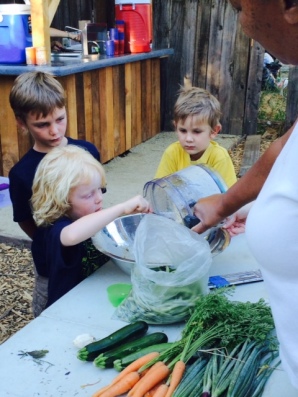 You’re never too young to make and enjoy hummus.

Kids from the Oak Park neighborhood wait for food genius Tyler to blend their hummus.

Farmers with plots donate some of the produce for the classes although most of it comes from other natural food resources. Today the donor is Heavy Dirt in Davis. Honey used in recipes is local, with the thought that people with allergies to various regional plants will find relief. A crowd of all ages has gathered. There is room for about 10 people per table. Tyler introduces what they will be making today and points to a mouth-watering array on each table. Zucchinis mingle with purple basil. Yellow nectarines, plums and apricots call out to be eaten. Tyler talks about the white cannellini beans that people can find canned if they do not want to cook them themselves and describes them as a fun alternative in hummus.

People gather around the tables and begin. Mike Jones, holding baby Gage, looks on while his wife Gina and their other son dig in to help with hummus. The family lives a couple of blocks away across from McClatchy Park and heard about the events at the farmers’ market. Gina is a vegan, Mike says, so these vegetable-oriented foods really appeal to her. While he likes vegan cooking, he says he still likes his meat and dairy. It is the second time for Max and his mother Rochelle. “He is getting more adventurous,” she says with a laugh. “He tried a yellow zucchini and he liked the Asian lettuce wraps and stone fruit salad last time. It is really helping his eating habits with this exposure.” Heather is there with her two sons Elliot and Martin. Her younger son likes to “mix a bunch of foods together,” she says. “He’ll easily mix sweet and sour.” They have been to a few classes at the College Heights Library. Heather looks down at her son after he has sampled the parfait. “Is it amazing?” she asks. “OK, high five.”

Meanwhile, Randy Stannard is nearby showing people the worm box that Sacramento State Environmental Studies Program has made for the garden. Randy is president of the board at Oak Park Sol and works for Soil Born Farms. Soil Born promotes programs that encourage young people and adults to learn how to produce healthful foods, and it mentors future farmers. The focus also is on teaching people to cook what they and others grow, and transforming urban spaces into community gardens. In general, they focus on green space development, Randy says. “Transitioning vacant lots or any unused spaces—like funny empty corners on a block. We can turn these into productive spaces. It doesn’t necessarily have to be a community garden. Some spaces may be suitable for some sort of housing development. Or maybe a little park instead of dead grass and weeds.” A major focus in the garden is to spread the concept and practice of urban gardening throughout this low-income neighborhood. Individual family plots are 15×10 feet, but all the gardeners take care of other areas of the garden. Within the community space is a kids’ garden, a wheel-chair accessible garden, a shade garden and native bee habitat—to mention a few. A greenhouse on the premises supports native plant growth. The 11,600- foot perimeter is planted with native California shrubs and wildflowers to attract butterflies and native bees. Besides the cooking classes, anyone can come to free composting and gardening classes. Randy and other food activists worked to see an ordinance passed by the City of Sacramento that promotes urban agriculture and is giving access to land for farmers. People with homes of an acre or more can support farmers. The ordinance took effect in April with the “purpose to support production and sale of locally grown foods, build community, increase public health and well being” and provide economic opportunities in areas that have been vacant or underutilized. These types of actions must be a neighborhood-led process, he stresses. “This community garden was started by the residents, spearheaded by Cara Jennifer Solis. Earl Withycombe inherited the land a few years ago. His family had owned the land since the 40s. The house associated with the land had burned down and he wanted to make it into something meaningful.” Randy says that in 2011, dumpsters started removing debris from the area. “It was full of trash and drug paraphernalia. Now people are gardening here year-round.”