The Legendary Blues Cruise craze is growing. My partner and I recently went on a seven-day cruise out of Los Angeles with more than 120 blues artists aboard.     Besides getting to listen and dance to fantastic musicians playing with their own bands, it was a special treat to hear individuals from bands jam with one another in unscheduled sessions.  It calls for some late nights. The regularly scheduled programs often aren’t over until 1 a.m. I mean, you can’t stay up later than musicians. But if you can wait it out, every corner of the ship has blues artists seeking one another out to jam. I realized it is an opportunity for them as well as us blues lovers. What’s better than listening to musicians who are appreciating one another?

So, you might have Taj Mahal’s daughter Deva Majal on stage belting something bluesy with International Blues Challenge winner Nick Schnebelen of Trampled Under Foot and Elvin Bishop playing guitars, while Curtis Salgado (the guy who trained the Blue Brothers) wailing on the harmonica. Or the Low Rider Band asking Bernard Allison to come on up. Acoustic Doug MacLeod pairing with Carolyn Wonderland. The sky’s the limit and the combinations mean brilliant music.

Then there are educational opportunities, a chance to learn about blues music in the making.  People ask what ports we went to. I try not to be flippant and say, “Who cares?” We did spend a few hours in Mexican Riviera ports. But the purpose of this cruise is to pack in as much blues music as you can for seven nights and six days. As veteran blues cruisers are fond of saying, you can always sleep when you go home.

One educational session on the October Legendary Blues Cruise focused on what it takes to write blues music. What do songwriters use for inspiration? Six blues performers/song writers gave their spin. First was vocalist and guitarist Lloyd Jones. Jones said you can write about whatever you want; that is the freedom to blues song writing. “I once wrote a song about a big old shirt,” he said. “That favorite old shirt you have that when you put it on you don’t have to be anywhere. You know the one your wife wants to throw away?”

Janiva Magness, vocalist, said she often draws from the truths that come forward for her after hard times, misfortune or heartbreak. Hers are songs of rising up, of persistence and wisdom. She shared the latest one she wrote along that vein with a haunting  refrain: “I get cut. I might bleed. But I don’t cry.”

Guitarist and lead vocalist for The Lowrider Band, Howard Scott, said, “you never know what’s going to be a hit.” The most definitive song their former band War ever wrote was “Lowrider.” He said members of the band were always strumming and singing this song about how all my friends are lowriders. “That’s crazy, I used to say. That song don’t mean nothing. Who wants that? That was our biggest hit.”

Jones said, “I wrote a song I love,” He sang a couple of stanzas of a lyrical and enchanting song: “They Call Me a Gypsy Man.”

“What did it do? Nothin’. But my point is, believe in what you are doing as a writer. Don’t be afraid to write a stupid song. Everybody needs songs in the business so don’t be afraid to send them out.”

Ronnie Baker Brooks, guitarist, vocalist and son of the blues great Lonnie Brooks, said a timeless song is one that makes you remember where you were and what you were doing when you first heard it. “I’m trying to grow up to write those songs. I keep a tape recorder handy on my I-phone when we are on tour. I write in hotels rooms about things I experience or hear.

“My father always preached to us to write our own songs. He used to say there are enough people doing ‘Hoochie Coochie Man’—nothing against Muddy Waters—but I knew what he meant. You got to be original.”

Brooks, whose sound is energy Chicago-style blues, recently wrote a song with lower-key, Delta blues tradition artist Keb’ Mo’ called “Thank You for Loving Me.” Brooks shared a preview of that song, which will be part of an upcoming album. The album also includes a cut with “the great Bobby (Blue) Bland before he passed.”

Acoustic guitar and vocalist Doug MacLeod writes all his own material. MacLeod told about meeting itinerant bluesman Honeyboy Edwards when he was 19 years old and in the Navy. “I was playing what you would call country blues at the time. I sat down with a bottle of Chianti with Honeyboy one night and told him I didn’t know anything about the blues. I’ve never picked cotton. I’m glad you told me about that mojo thing, but what do I write about?”

“Have you been lonely, boy?”

“Have you ever needed a woman?”

“Have you ever needed money for that little apartment you got down the block?”

MacLeod said he told him that he must write, sing, play and entertain. “The blues is about overcoming adversity, not about subjugating yourself to it,” MacLeod said. “And be sure to pack your sense of humor too.”

The songwriter said he once experienced a critic who came up to him after a performance and told him he kept hearing about overcoming troubles, keeping a sense of humor and that the world was about sharing, love and kindness.

“I don’t see any of that,” the man told him and walked away. “He didn’t even buy a CD,” MacLeod said. “I started thinking maybe it was the way he was seeing the world. When you are waking up all the time and seeing gloom, maybe you need new eyes.”

This was fodder for MacLeod’s new song “Brand New Eyes.”

The last panelist was guitarist and singer Elvin Bishop. “When I write songs, I have to be careful,” he said. “Because you’ve heard my voice.” (Yes, he did write and sing “Fooled Around and Fell in Love” and “Travelin’ Shoes” long ago but has a voice that is distinctly like someone singing out of a hole-y muffler). “I mean I am not going to capture the imagination of the public by pure vocal beauty.”

Apparently “borrowing” ideas is OK in songwriting. Bishop related a time in Chicago when he attended a blues club with Ronnie Baker Brooks. Brooks’ quip about the lead singer was: “That man is as country as a dozen eggs.”

“I ended up putting that in a song,” Bishop admitted to Brooks. “I didn’t even have the decency to send you any money.”

Bishop said jazz blues bassist Ruth Davies once told him about a horn player she knew who always said he couldn’t even do wrong right. It stuck in his mind and he created a song with the refrain. In his typical whimsical style, Bishop said he called the hard luck guy in the song Maurice, “because it rhymes with police.”

Moderator Tommy Castro, leader of the Tommy Castro and the Painkillers band brought the group back to a more serious note with a song he wrote about “going back south. I ain’t gonna worry no more.” Although Castro names a number of artists who have influenced him, he comes forth with his own unpretentious, soulful voice and, when he gets going, a guitar that really cooks.

He is always is modest about his achievements and spearheads jams to highlight other talents, but Castro has been the recipient of many Blues Foundation awards for best blues male artist, best contemporary blues album, the B.B. King Entertainer of the Year and, with his band, Band of the Year.

Castro echoed his fellow artists about song writing: “Come from what you know.”

More photos from the Blues Cruise: 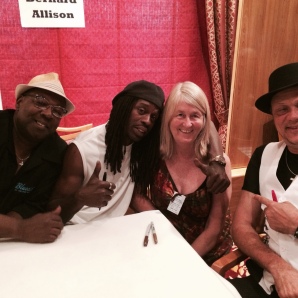 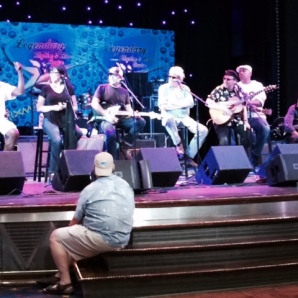