The town of Marysville, CA, north of Sacramento, hosts a parade each year honoring the Bok Kai Temple and the Chinese-American descendants of people who came to the town in the 1880s. Seminar-goers from the Temples and Museums Conference got to watch the parade down the main street, a spectacle that included their beloved and extremely long Chinese dragon (I counted at least 35 pairs of legs propping him up), martial arts clubs, high school bands, the de rigueur politicians in vintage cars, lads popping fire crackers along the street, and fire trucks old and new.

The day after the town celebrated “Bomb Day.” The event begins with a procession through town. Participants carry plaques with the names of various Buddhist deities. Thousands of firecrackers explode, turning the street a bright pink with their detritus. Eighteen handmade bombs stuffed with gunpowder are set off near the temple. A ring atop each cylinder bomb blasts into the air while young men below scurry to catch it and learn the lucky number it bears.

This was the 136th year of the Bok Kai Festival. Bok Kai is a protective god. The temple bears his name and is one of oldest Taoist temples in the country. The celebration happens in the second month of each Chinese New Year.

Fortune board after praying 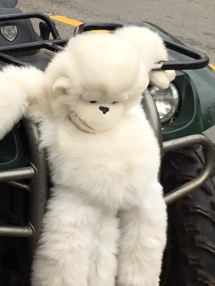 Year of the Monkey
Advertisement