The is the third part in a four-part series in honor of Black History Month, drawn from Michelle Alexander’s book, The New Jim Crow: Mass Incarceration in the Age of Colorblindness. 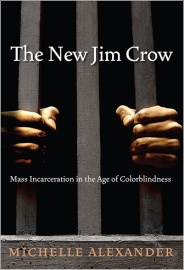 Michelle Alexander has stated that “few legal rules meaningfully constrain the police in the War on Drugs.” In fact, she says, “the rules of the game are designed to allow for the roundup of an unprecedented number of Americans for minor nonviolent drug offenses.”

What then transpires once a person is arrested?  Alexander says that defendants are typically pressured by the threat of lengthy sentence into plea bargaining. The most astonishing revelation is that “Tens of thousands of poor people go to jail every year without ever talking to a lawyer, and those who do meet with a lawyer for a drug offense often spend only a few minutes discussing their case and options before making a decision that will profoundly affect the rest of the lives.”

Once again, television and movies seem to be letting us down, portraying the public defender rushing in to represent the wrongfully accused. Everyone gets a lawyer of some ilk, right? 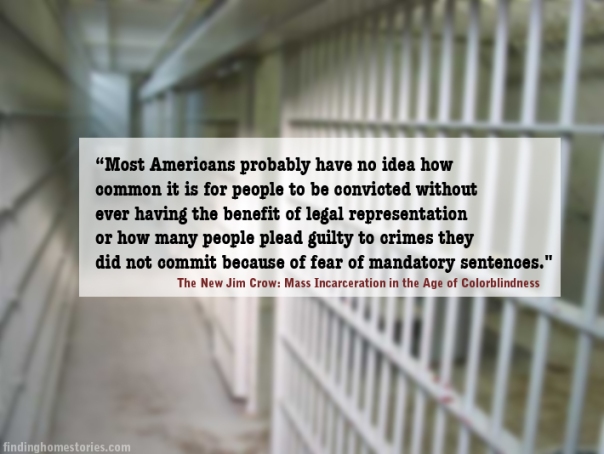 While the Supreme Court ruled 40 years ago that poor people accused of serious crimes were entitled to counsel, it left it up to states and local governments to decide how legal services should be funded, Alexander says. But the War on Drugs brought out the “tough on crime” politicians and public defender offices are usually not on the top of the funding list.

The author’s statistics show that 80 percent of criminal defendants are unable to hire a lawyer because they are indigent. Public defenders have large case loads, sometimes “well over one hundred clients at a time…And some states deny representation to impoverished defendants on the theory that somehow they should be able to pay for a lawyer, even though they are scarcely able to pay for food or rent.”

“…in Wisconsin, more than 11,000 poor people go to court without representation every year because anyone who earns more than $3,000 per year is considered able to afford a lawyer…The fundamental right to a lawyer that Americans assume applies to everyone accused of criminal conduct effectively does not exist in practice for countless people across the United States.”

She also says that almost no one goes to trial. Most plea bargain. After the arrest, the prosecutor is in charge, she says. The prosecutor may dismiss charges or pile more on if they can be proven in court—“a practice known as overcharging.”

This is a major factor in defendants pleading guilty to crimes, even if they are innocent, rather than risk the results of a trial.

“The pressure to plead guilty to crimes has increased exponentially since the advent of the War on Drugs. In 1986, Congress passed The Anti-Drug Abuse Act, which established extremely long mandatory minimum prison terms for low-level drug dealing and possession of crack cocaine,” she says. “The typical mandatory sentence for a first-time drug offense in federal court is five or ten years.”

On top of that, she says that, “The number of snitches in drug cases has soared in recent years, partly because the government has tempted people to ‘cooperate’ with law enforcement by offering cash, putting them ‘on payroll,’ and promising cuts of seized drug assets, but also because ratting out co-defendants, friend, family, or acquaintances is often the only way to avoid a lengthy mandatory minimum sentence.”

Consequently, “thousands of people are swept into the criminal justice system every year pursuant to the drug war without much regard for their guilt or innocence.”

The right of the people to be secure in their persons, houses, papers, and effects, against unreasonable searches and seizures, shall not be violated, and no warrants shall issue, but upon probably cause, supported by oath or affirmation, and particularly describing the place to be searched, and the person or things to be seized.”  Excerpt from the Fourth Amendment

Meanwhile, in 1984 Congress amended a law that had allowed the confiscation of property that had anything to do with drug manufacturing and storage equipment, along with the drugs and the transportation used to convey it.
The amendment made it possible for law enforcement agencies to keep and use the proceeds from asset forfeitures and to retain up to 80 percent of the assets’ value.

“Suddenly, police departments were capable of increasing the size of their budgets, quite substantially, simply by taking the cash, cars and homes of people suspected of drug use of sales…on mere suspicion of illegal drug activity.

“Once the property was seized, the owner had no right of counsel, and the burden was placed on him to prove the property’s ‘innocence.’” Because most of the people who had cash or property seized were poor, they couldn’t hire an attorney or pay court costs, so most people did not contest the seizure.

Naturally the system lent itself to enormous abuse, with whole task forces devoted to seizing whatever they wanted whenever they wanted. It wasn’t until 2000 that Congress passed the Civil Asset Forfeiture Reform Act which was supposed to address the abuses, but Alexander says the reforms were inadequate. It shifted the burden of proof onto the government but still allows absurdities like one case Alexander cites:

“A woman who knew that her husband occasionally smoked pot could have her car forfeited to the government because she allowed him to use her car. Because the ‘car’ was guilty of transporting someone who had broken a drug law at some time, she could legally lose her only form of transportation, even though she herself committed no crime.”

And, under the new law, drug busts motivated by desire to seize cars, houses and other property are still allowed and local agencies still can keep the seized assets. This ensures that law enforcement, profiting in this manner and from other federal incentives will support the continuance of the War on Drugs.

What does the War on Drugs, and subsequent mass incarceration, mean for African Americans in the United States? What is the harm done by stigmas after prison and is there a way to start dismantling the system that promotes, under the guise of controlling crime, such enormous racial injustices?